For this week’s post of Tuesday Poetry we decided to highlight a zine tribute to the inspiring poet, Harold Norse. 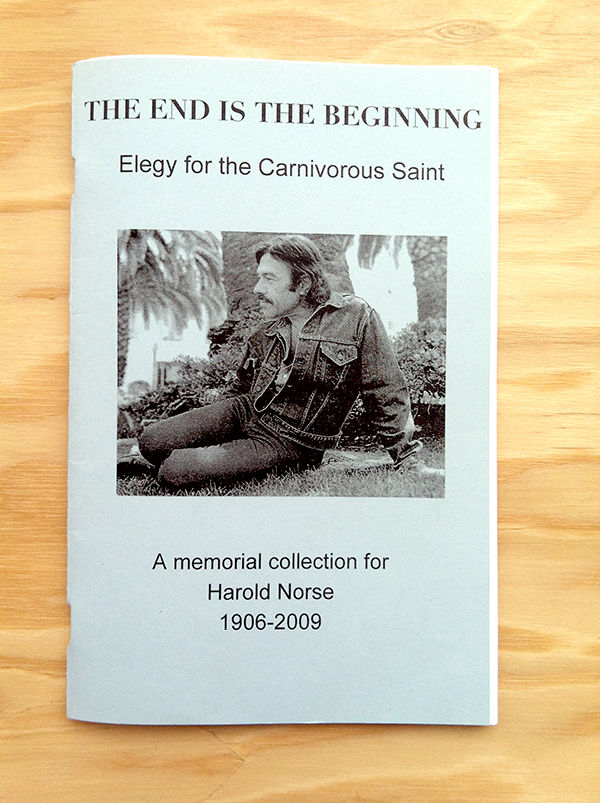 Harold Norse was one of the last of the major Beat poets whose idiomatic works became landmarks of gay writing. As Michael Carlson described, Norse was “…beat before the Beats, hip before the hippies, and out of the closet long before gay liberation.”

The End is the Beginning – Elegy for the Carnivorous Saint, A Memorial Collection for Harold Norse 1906-2009 was compiled by Tate Swindel, a family friend of Norse’s. The zine features poems, letters and essays about Norse written by: 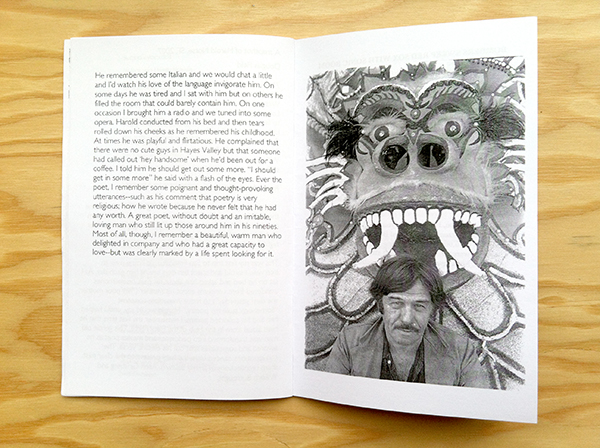 In F.A Nettelbeck’s poem “One More Vacancy At the Beat Hotel” he writes:

“the end
is the beginning”

dieing on a
Monday at 92

with his pages
pulled

other voices down
the hall

The dedications of love and admiration are for any fan, or first time encounterer of Norse’s, amazing to experience. Many of the stories shared shed light on his electric personality and allow you to peer briefly into the scared world shared by beat poets. Their relationships served as inspiration for generations beyond their’s and you can feel the loss in the words written to or about Norse in these pages. 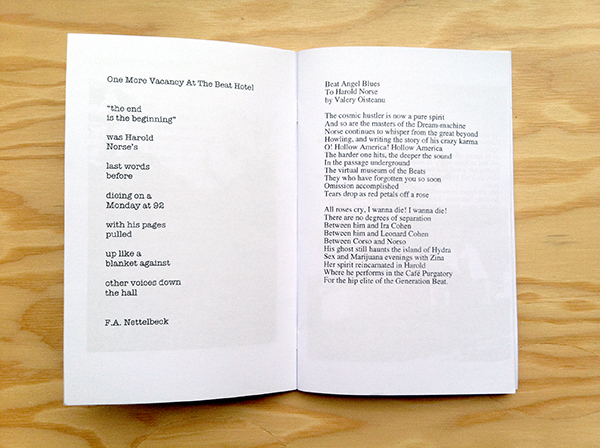 When you pick up a $4, black and white xeroxed zine and it makes you emotional, inspired and curious to learn more you know you have encountered something special. After reading through The End is the Beginning I delved into Norse’s memorial website which is filled with memories, photos, books and records. If you want to learn more about Norse I encourage you to visit: www.HaroldNorse.com

Elegy for the Carnivorous Saint available in the bookstore here.

Not included in the book, but something to share of Norse’s, is a poem from his time in Tangier recalling the visions and ecstasies shared with his young lover.

To Mohammed On Our Journeys

I was the tourist
el simpatico
and your brother offered you
and also himself
I forgot about your brother
and we took a flat in the Marshan
with reed mats and one water tap
about a foot from the floor
and we smoke hasheesh
and ate well and loved well
and left for the south
Essaouira, Fez, Marrakech
and got to Taroudant
thru the mountains
and bought alabaster kif bowls
for a few dirhams and watched
the dancing boys in desert cafés
kissing old Arabs and sitting on their
laps, dancing with kohl eyes
and heard the music down in Jejouka
in the hills under the stars
the ancient ceremony, Pan pipes
fierce in white moonlight
by white walls
with hooded figures
stoned on kif
for eight nights
and the goatboy in a floppy hat
scared us, beating the air
with a stick, beating whomever came close,
Father of Skins, goat god,
and the flutes maddened us
and we slept together in huts.