Kathleen Ryan’s installation based ceramic sculptures are three dimensional sketches of commonplace architecture; cinder block walls, steel stair railings, security gates. Made of lustrous glazed ceramic, the fragile material is pushed to transcend its physical limits, playing opposing roles simultaneously. As the sculptures hover above the ground or precariously upright, they also hover between utility and decoration, handmade and manufactured, glamour and grit, the banal and the sublime.

Kathleen Ryan is an artist living and working in her hometown Los Angeles. She is an MFA candidate at UCLA and will graduate in Spring 2014. 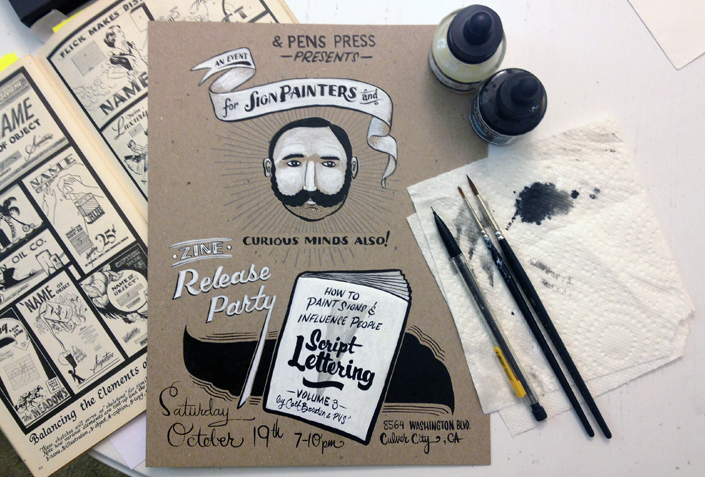 Come see real hand painted signs and learn how to paint them… in a Zine!

For one night only Colt himself will be here to sign and sell copies of the newly released zine. Also on display will be many hand painted original signs and lettering examples from within the pages of the zine.

with musical performances by

INFO:
Names like Barry McGee, Margaret Kilgallen, and Chris Johanson are credited as some of the key players in the San Francisco 1990’s art movement known as the “Mission School.” The history books teling the story of this art movement and bringing it into the mainstream have left behind a few artists that were and still are artistically trailblazing, often times alongside those that received greater acclaim.

The story of the “Mission School” is definitely not complete without XARA THUSTRA. Both an activist and artist, Thustra has been pushing the envelope socially and artistically for 15 plus years in San Francisco. Xara’s ever evolving creative medium has been graffiti, screen printed posters. calendars, murals, paintings, video, music, performance and protest. Socially, Xara has been responsible for anti-war actions, gay activism, feeding the hungry, anti-capitalist actions, squats like 949 Market, and so much more…

This beautiful 500 page book captures 15 plus years of Thustra’s work in one package through photos and imagery. Not to mention, there are also cameos contained within from Xylor Jane, Chris Johanson, Barry McGee, Emory Douglas, Erick Lyle, Kyle Ranson, Ivy Jean, Sy Loady, and a cast of other SF punks, artists, queers, and activists. Such fantastic stuff. Don’t miss this.

“Thustra’s art fills me with a crazy unhinged joy. It makes you want to do something joyful and spectacular and very illegal. I would like to think that my heart looks something like this, and yours too.” – Michelle Tea

“I have always been inspired by the creativity of Xara. It is always 100 percent care. One of my favorite artists that I met in SF. Making things to make people think and with so much concern. This book about creative ritual and meditation toward making things better is a good gesture in the Left direction. A non text book, but in the school of life.” – Chris Johanson

“Like an invisible giant, silently stalking our city, converting it’s ever-more-boring facade into an impassioned, beautiful call to arms, revolution, and to love. Xara has created an incredible genre and gender busting body of work. This is the freak flag flying high.” – Bill Daniel